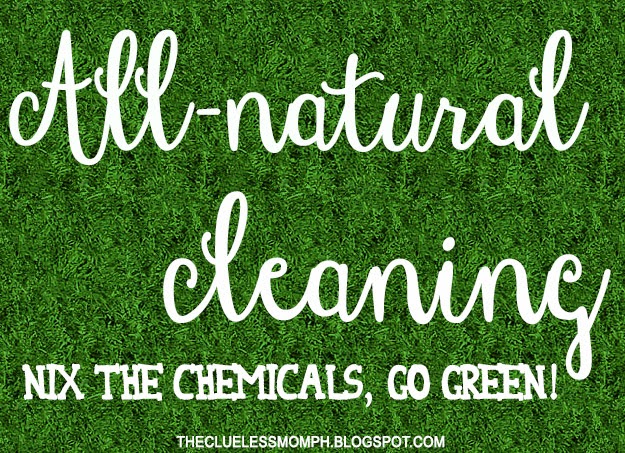 It’s Saturday! Happy weekend everyone!
Last Thursday was my rest day from work, so I decided to do some major cleaning around the house. Before doing so I was regularly searching for all-natural cleaning tips because I wanted to avoid using too many chemicals, especially on the floor. So let me share how I managed to clean my house with next to no chemicals.

When Typhoon Glenda decided to visit we stayed at my mom’s house for a week because, well for one there was no electricity (and it took seven days for the power to come back), and second was because I was dead scared of being alone with my son during a blackout while my husband was at work.
So anyway, when we came back I noticed how messy the house was but could not find time to clean in between taking care of my son and working at night, so after putting Ethan to sleep last Thursday evening, I thought to myself:
“There’s no better time than now”.
Armed with a mop, broom, several rugs and a good Spotify playlist, I decided to get to it.(Though I did clean at night, I took these pictures the next morning, I figured you’d appreciate bright pictures)
I decided to start with the living room, where Ethan spends most of his time. The first thing on my agenda was to clear out my son’s crib and put it away for good. He doesn’t sleep nor play in it anymore and we turned it into a temporary toy box which has now become an eyesore. I bought this big plastic basket at Ace Hardware for P149 to replace the bulky crib. This will make it easier for me to pick up his toys since I can carry the basket anywhere in the house. With the crib gone we have so much more room in the house, but then it made me realize how fast my son is growing up! *tears* 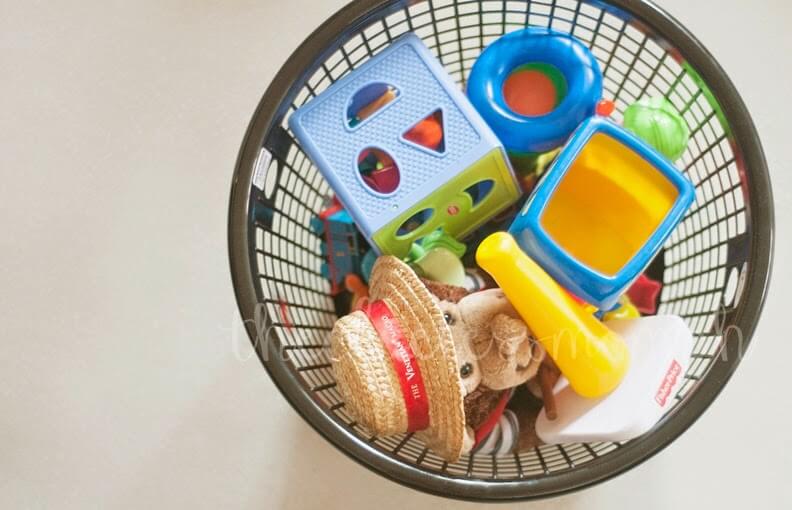 I also decided to clean the toys so that they would be nice and clean the next morning for my son’s playtime. For plastic toys without batteries, I simply took a basin and filled it with water and a few drops of dishwashing liquid and left them to soak for a few minutes. I always use Human Nature’s Dishwashing Liquid on all of my son’s things, from his plates and spoon to his bottles.. and now his toys! After giving them a good soak I rinsed them all and left them on a towel to dry. As for his plastic toys with batteries, I simply wiped them with a clean rag dipped in a mixture of water and vinegar, avoiding the mechanisms. Vinegar is a staple in most natural cleanser recipes as it disinfects and deodorizes. If you’re skeptic because of it’s smell, don’t worry because the sour smell dissipates as it dries! I promise! 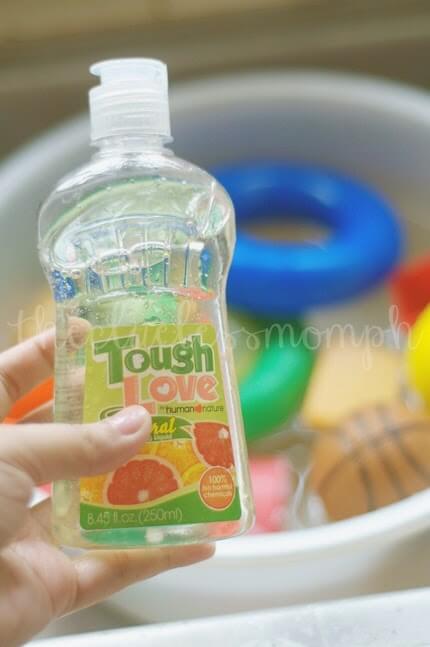 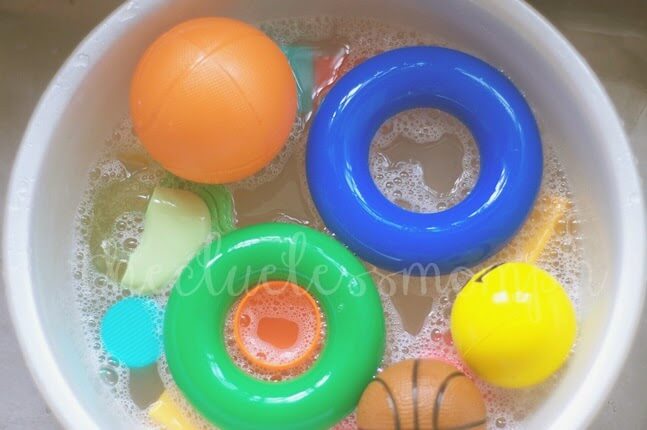 Next, I worked on cleaning tables and shelves in the living room. I’d normally use Pledge to wipe surfaces but this time I used this natural Homemade Pledge recipe I found online.. where else but Pinterest! This recipe worked well and smelled clean and fresh because of the lemon juice (yes, you can use it in place of the lemon oil, but I’d recommend not to store it for a long time).
(I didn’t get to take a picture of my DIY Pledge, but you can check out Pinterest for tons of recipes with pictures. The one I used was this one)
After rearranging some furniture and displays, I moved on to the kitchen and dining area where Ethan also likes to hang out (they’re connected to the living room). I always keep the kitchen clean, so I didn’t have to do much here. I simply arranged some of the plasticware and cleaned the greasy stove with some baking soda and dishwashing liquid. And as for the dining area, I decided to get rid of some clutter and store them properly in the cabinets. I also used the Homemade Pledge on the dining table.
After I was done with the kitchen and dining area, I was already feeling tired so I decided to end my cleaning day by sweeping and mopping the floor. I used to mop the floor with a mixture of water and bleach, but I’ve grown to hate the smell. Then I came across this recipe on Pinterest (again) and decided to try it out since I had all the ingredients in my kitchen.Click here for the recipe.

Most of these type of recipes require distilled vinegar, but I am yet to come across it in our local supermarkets. I find that common vinegar brands work fine.

I found this mixture to be very effective in removing dirt and it did not leave any strong smell. The smell of the vinegar was evident at first but as it dried only the scent of the dishwashing liquid remained. I will definitely use this again!
Though it was tiring I was glad that the few hours I spent were productive and the house looks much better! I’m planning to tackle the bedroom on my next rest day, especially the cabinets! I’ve come across a few awesome organization tips and I’ll be sure to share them once I try them out!
Have you tried green, natural recipes to clean your home? How did it go?
Continue Reading